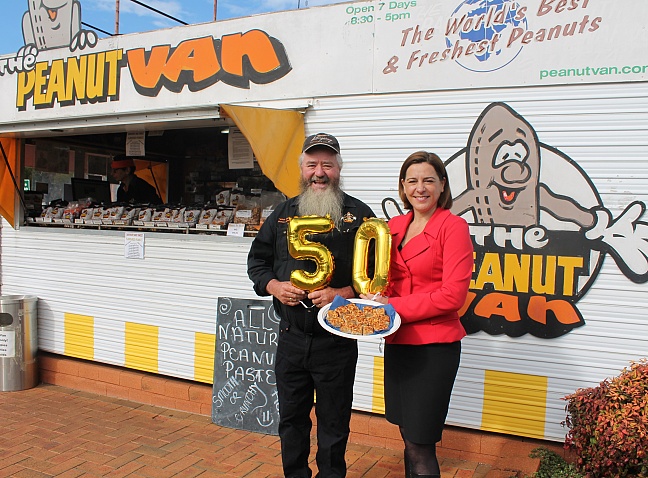 Member for Nanango, Deb Frecklington, has shared her secret peanut slice recipe in celebration of the Peanut Van’s 50th anniversary.

Mrs Frecklington said it was an honour to be a part of the celebrations for the iconic Kingaroy business.

“I feel very privileged to be a part of the Peanut Van’s 50th anniversary and to provide my secret peanut slice recipe for their birthday cookbook,” Mrs Frecklington said.

“Since being elected, I have been so proud to promote the South Burnett’s peanut industry to my colleagues at State Parliament and in my travels around Queensland.

“Over the years I have taken Kingaroy peanuts with me wherever I go. During a visit to drought affected primary producers near Longreach in 2015, I took a bundle of Peanut Van products.

“Fresh, delicious peanuts from the South Burnett were the obvious choice and it was lovely to give these small gifts and help create a connection between primary producers from two distinct regions.

“I would like to congratulate owners Rob and Christine Patch and of course Peanut Van Manager, Rowena Dionysius on this important milestone.

“The Peanut Van is such an icon in our region, and I look forward to seeing the business grow even further over the next 50 years!” Deb said.

Preheat oven to 180 degrees. Grease and line a rectangular slice tin with baking paper. Place butter in a bowl and melt. Add the flour, coconut and caster sugar and mix. Place mixture into tin and press down firmly. Bake for 10 minutes.
Sprinkle over the nuts and finely chopped chocolate. Pour can of condensed milk over the top of the nuts & chocolate until covered.
Bake for a further 15-20 min until brown.