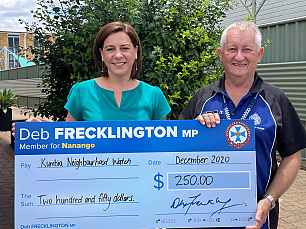 Member for Nanango, Deb Frecklington, has announced the successful recipients of the 12th Round of her Local Hero Grants, helping to bring some early Christmas cheer across the Nanango Electorate.

Mrs Frecklington said the applications from local groups and individuals are always high quality and she was proud to nominate the following groups as her ‘local heroes’:

“My Local Hero Grants are available for community groups from the Nanango Electorate. These are small but meaningful $250 grants that provide an opportunity to show my support, thanks and appreciation for all our hardworking volunteer groups who make such a difference for our community,” Deb said.

“They also encourage people who are attending sporting or other events and need assistance to make it possible,” she said.

The closing date for Round Thirteen is 31 March 2021. If you would like to apply, please go to www.debfrecklington.com.au or contact the Electorate office on 4190 7100 for the guidelines.

Member for Nanango, Deb Frecklington, says the long-awaited State Budget has not delivered for the people of the Somerset.

Mrs Frecklington said it was disappointing when looking at the regional budget analysis just one small project was listed for the Somerset.

“It seems incredible that the only state budget item listed for the Somerset was $6,000 for solar panels for the Esk Civic Centre,” Mrs Frecklington said.

“Why does the Somerset continue to be overlooked by this Labor Government? This is an area so close to Brisbane, connecting south-east Queensland to the inland.

“Labor really needs to start looking at the Somerset and the huge opportunities we have here.

“But it needs backing with better roads, better health services, water security for irrigators and less red and green tape for our primary producers and small business.

“Most of the projects listed in the Budget for the Somerset, like the D’Aguilar Highway upgrades have been previously announced. They are not new projects.

“I’m sure the Jimna Fire Tower Action Group will also be concerned that the funding Labor promised several years ago to renovate the tower has been dropped from the Budget.

“I will also be seeking further information about funding announced for the Brisbane Valley Highway between Ipswich and Harlin. Details have not been provided on the scope of works, and I will seek these details on behalf of the community.

“I’ll continue to push for these issues on behalf of our community,” Deb said.

Member for Nanango, Deb Frecklington, says the long-awaited State Budget has not delivered on many important projects needed in the South Burnett.

Mrs Frecklington said it was disappointing that long-awaited safety improvements for major connecting roads, along with water infrastructure have been overlooked.

“Unfortunately, the key projects our community has been calling for have not been funded in this delayed State Budget,” Mrs Frecklington said.

“Key roads like the Mundubbera-Durong Road, Kilkivan-Tansey Road and Maidenwell-Bunya Mountains Road have once again been overlooked.

“Water infrastructure like the Barlil Weir has also not been considered.

“Many of the projects listed in the Budget for the South Burnett have been previously announced by Labor, or have even been finished. They are not new projects.

“I am pleased however that my lobbying on behalf of Tanduringie State School has been successful with a small amount of funding listed for planning works for a new bridge on Tanduringie Creek where a near tragedy occurred with the school bus a few months ago.

“I will also be seeking further information about funding announced for the D’Aguilar Highway between Yarraman and Kingaroy. Details have not been provided on the scope of works, and I will seek these details on behalf of the community.

“There is so much opportunity right here, but it needs backing with better roads, better health services, water security and less red and green tape for our primary producers and small business. I’ll continue to push for these issues on behalf of our community,” Deb said.

Member for Nanango, Deb Frecklington has been ejected from State Parliament today for questioning the Labor Government about the lack of mental health services at the Kingaroy Hospital.

Mrs Frecklington said she had been defending her communities concerns about whether there will be an improvement to mental health services in the Hospital redevelopment.*

“Given the Burnett has been listed this week as Queensland’s region with the highest rate of suicide, I would have thought the Labor Government would have taken my question and concerns more seriously,” Mrs Frecklington said.

“Instead, the Minister for Health provided no answers and had no clue about whether these services would be included in the Kingaroy Hospital. My further questioning was met with arrogance and I was ejected from the House.

“This is typical of Labor who prefer to shut down debate, rather than listen to the concerns of regional communities like mine.

“In relation to the results reported by the Australian Institute of Health and Welfare, they sadly confirm what so many in our region already know, that too many people are choosing to end their life through suicide.

“There is a great sense of loss and a real sense of despair that suicide has become a constant in our community, particularly the rate of youth suicide.

“It is unacceptable that the Burnett has become Queensland’s region with the highest rate of suicide and this clearly validates why we have been calling for more services in the South Burnett and Cherbourg.

“It is also why I’ve been highlighting the shocking unemployment statistics for the young people in the Wide Bay Burnett, the need for economic development in the regions, and continued support for the agriculture sector during drought and disaster.

“I will continue to fight for improved mental health care services, more employment opportunities and initiatives that provide real hope for our community,” Deb said.

A question to the Health Minister.

My community has the highest rate of suicide in the state and hundreds of “police
incidents.”

Will the Minister answer this question from a constituent?
“There are no reported upgrades to Mental Health Services in the new Kingaroy Hospital… will there be a safe room (as we have needed for so long), or any inpatient Mental Health beds?”

Member for Nanango, Deb Frecklington, has sought answers from the Labor government in relation to the closure of counter service at the Kingaroy Hospital Patient Travel Subsidy office.

Mrs Frecklington said she has taken complaints from patients who have recently attended the Patient Travel office to submit their forms, only to find it shut.

“The closure of the counter service for Patient Travel applications is unacceptable,” Mrs Frecklington said.

“We all know how important the Patient Travel Subsidy is for rural and regional people and it is obvious this Labor Government has no idea why a counter service must remain available.

“What we now have is a box where people can submit their forms. So, if there is any information missing on the forms or an error, instead of being picked up then and there by a staff member, the forms will need to be posted back to the patient and then returned again. All this wastes time and means further delays in receiving their travel and accommodation subsidies.

“Many times people have told me that the Patient Travel paperwork is often more stressful than their actual treatment, which really is saying something.

“This loss of service will mean even more unnecessary stress and that is why I have submitted a Question on Notice* this week in Parliament seeking answers about why this service has been cut,” Deb said.