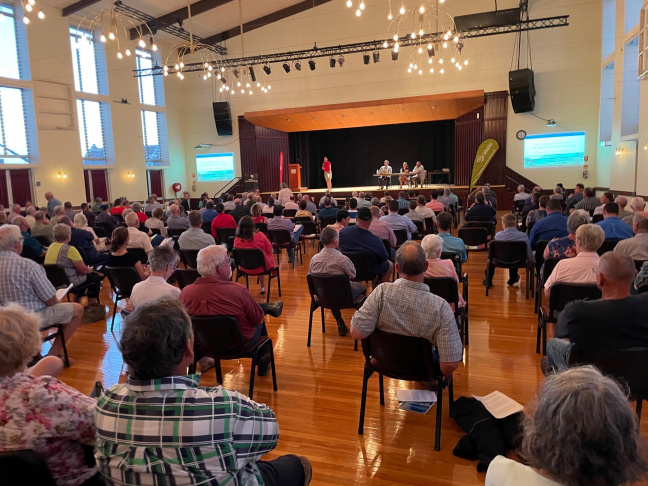 Member for Nanango, Deb Frecklington said the huge turnout (see photo above) for the Reef Regulations consultation in Kingaroy on Tuesday 9th February in Kingaroy demonstrated the level of concern in the community.

Mrs Frecklington understands it was the biggest turnout so far for any of the consultations about the looming Reef Regulations which have been held in reef catchments across Queensland.

“It was heartening to see so many primary producers attend the meeting in Kingaroy to voice their concerns about these onerous regulations and how they will affect their business,” Deb said.

“These reef regulations for cropping and horticulture will start coming into effect from 1 June this year and ultimately they will affect every landholder in a reef catchment area,” Mrs Frecklington said.

“For our region, this means every primary producer in the South Burnett and western Gympie regions,”

“Above everything else, the main question asked was why our region is even included in this legislation.

“When these laws were moved through the Parliament in September 2019, the LNP proposed amendments to introduce at least a ten-year grace period for the Burnett-Mary catchment area, but this was rejected by Labor.

“There were some excellent questions about how these regulations will be implemented and what level of compliance will be undertaken.

“People also highlighted that the rules are different for producers, depending on whether you are growing a commercial crop, or a fodder crop. Not to mention there will be a fee of up to $870 to apply.

“The role of the government should be to work alongside farmers and communities towards environmental outcomes, instead of ramming unworkable laws down their throats.

“I urge producers to make a submission letting the Government know how this will impact their business,” Deb said. Submissions can be made by 17th February at https://www.qld.gov.au/environment/agriculture/sustainable-farming/reef/reef-regulations/producers/cropping