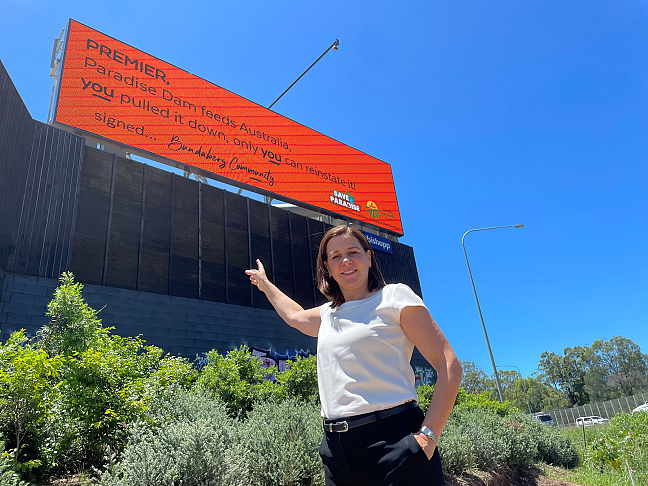 Bundaberg farmers have gone to new heights in an attempt to be heard by the State Government about the future of Paradise Dam.

A giant billboard organised by Bundaberg Fruit and Vegetable Growers has gone up in the Deputy Premier’s electorate, on the Bruce Highway North of Brisbane.

It comes as Shadow Water Minister Deb Frecklington reignites calls for the State Government to release their detailed business case into the future of Paradise Dam.

Ms Frecklington said the best Christmas present the State Government can give Wide Bay locals is confidence the full wall height will be restored.

“Labor has played politics with Paradise Dam from the onset,” Ms Frecklington said.

“The region’s growers and water users continue to be caught in the middle of this debacle.

“Engineering experts have said the wall can be restored.

“The State Government needs to be upfront with the people of Bundaberg.

“Will the State Government take the engineering advice, or find another excuse to tear the wall down?

“I again call on Labor’s Water Minister and Labor’s Member for Bundaberg to stand up for the people they claim to represent.

“We’ve already seen precious water from the recent rain washed out to sea, in a cruel blow for locals at a time when water has never been this vital.”

Member for Burnett Stephen Bennett is concerned the year is almost over and Wide Bay locals are still in the dark over the Future Options Paper for Paradise Dam.

“We need the report released to the public today,” Mr Bennett said.

“That doesn’t mean handing it over to a government pen-pusher and putting it in the desk for another 12 months.

“That means giving it to our farmers, to the people who need to make decisions about putting crops in the ground.

“It’s high time the Palaszczuk Government shows regional producers how much they value the food on their plates.”