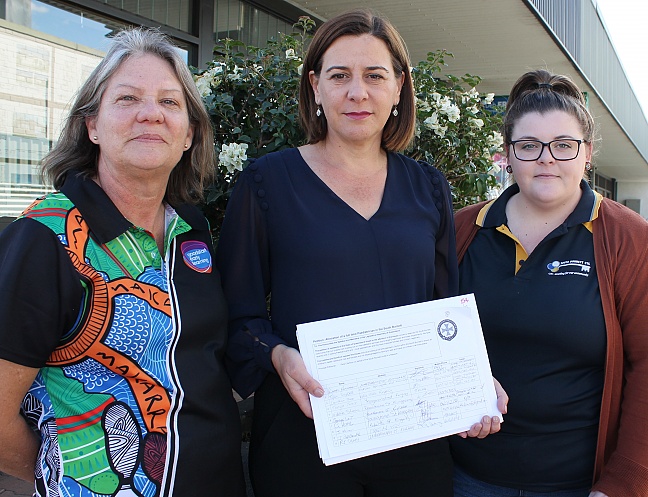 Member for Nanango, Deb Frecklington has congratulated the South Burnett Under 4’s Network who have secured 1,800 signatures supporting the petition for a full-time Paediatrician in the South Burnett.

Mrs Frecklington says she was proud to officially table the petition in Parliament and support the call for this critical service.

“There is a desperate need for Paediatric Services in the South Burnett and I have been pleased to work with the South Burnett Under 4’s Network to highlight this need and support the petition,” Mrs Frecklington said.

“I would like to congratulate Peta Clarkson who was the Principal Petitioner. The group worked hard to secure so many signatures and this will really help demonstrate the need in our region.

“As the petition says, South Burnett children are missing out on vital paediatric services due to lengthy wait times and the need to travel to Toowoomba or Brisbane for an appointment. It’s unacceptable and our kids deserve better.

“We need a full-time Paediatric Specialist based in the South Burnett.

“My previous requests to the Labor Health Minister have been rejected. He has an obvious disregard for regional communities such as ours and doesn’t understand the difficulties parents face trying to have their children seen by a specialist.

“We have children in our region waiting up to two years for an appointment. For a growing child, this can mean the difference between a good outcome or a lifetime of struggle.

“For example, children needing a diagnosis for autism can wait several years. This impacts their education as schools cannot implement plans or access extra resources until a specialist paediatric diagnosis is available.

Peta Clarkson of the South Burnett Under 4’s Network says the group started the petition because they are concerned about the many children within the South Burnett who are not being seen by a specialist paediatrician.

“For medical issues, behavioural concerns, medication and re-medication issues, children must have timely access to a paediatrician so they can have quality educational programs, early intervention programs and NDIS support,” Ms Clarkson said.

“Children in our region are being disadvantaged due to their rural location. Our aim is to ensure that equity of access, so families don’t have to travel long distances for specialist services,” she said.

Photo: Member for Nanango, Deb Frecklington, was pleased to accept the petition from Peta Clarkson (l) and Jacqui Grosskopf of the South Burnett Under 4’s Network.